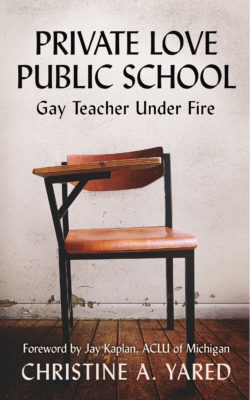 Just a reminder, everyone, including the general public, is invited to a program featuring Christine Yared, talking about new her book, Private Love, Public School, Gay Teacher Under Fire, on Sunday, April 18, at 4:00pm via Zoom. A local attorney and LGBT+ advocate, Christine tells the story of Gerry Crane, a music teacher at Byron Center High School, who was forced out of his job in 1995 for being gay. He was loved by many students and parents, but when word spread about his commitment ceremony to a man, a crusade was begun to remove him. Christine applies her skills as a lawyer to uncover how administrators used unfair tactics against Gerry.

Also, the book tells the story of Gerry’s personal journey as a deeply religious gay man and provides details about the support he received from congregants of his own church, as well as the tensions the situation created within the congregation. The public drama that ensued also deeply engaged local Christian congregations who were critical players on both sides of the conflict – some churches calling for Gerry’s resignation and others, including Plymouth UCC, supporting his continued tenure.